Why is Evidence-Based Reality not the Norm in America?

I get annoyed, angry, even depressed every time I get on Facebook these days and am confronted with yet another news item or opinion piece that points out how gullible, naive, undereducated, or silly the American public is when it comes to evidence-based reality. From new polls showing a backward trend to the public's acceptance of the highly-supported theory of evolution to TV preachers decrying the Air Force's decision to not require inductees to say "so help me God," to the idiot ramblings of those who still insist that vaccines cause autism, that the measured climate change is not due to human activity, or that GMOs are harmful. It's maddening!

The answer to all this is very, very, simple. It's childlike in its simplicity if only people would adopt it. If people would live their lives by the mantra of EVIDENCE-BASED REALITY instead of the pervasive faith-based reality that so many people cling to, humanity would be so much better off. Think about it: There would be no terrorist organizations, no borders defined by religious zealotry, no one telling others what to do based on their own narrow view of biblical morality, no TV evangelists and no more ducking tax payments due to religious privilege. Oh, I'm sure there would still be person-on-person judgment, but it wouldn't be faith based.

Empirical data and testable evidence is the only way we have of discovering reality! That's not to minimize feelings, like love, or actions such as charity. We, as humans, have emotions that were evolved within us to help us cope with being societal. But when it comes to learning about that society and our place within it, or when it comes to discovering things about the natural world, empirical evidence, logical reasoning, and data are all that matter. Faith is an incumbrance. Faith should be bestowed on other people, or oneself, when the evidence shows its justified. And hope can be useful as a motivational factor for trying. But putting faith in gods, fairies, spirits, angels, or other supernatural beings is not only worthless, it's pathetic. It means that critical thinking skills have been abdicated in favor of wishful thinking. It's cheating oneself, and all of society, out of realizing the potential that is inherent within us.

I live my life on empirical evidence, facts, data, logic, and critical thinking skills. There is no room in my life for faith, at least faith that is not derived from evidence. I hear so many people tell me, "you gotta believe in something! But why? Why do I have to believe in something that is not derived from evidence or logic? To me that's just silly. My life is not missing anything because I have no blind faith. I am not somehow disabled because of it, and yet people say they feel sorry for me for not knowing God or Jesus. I don't know God for the same reason that I don't know the tooth fairy: neither one of them exist in the real world.

People tell me "but you can't prove there is no god." That's right; I can't. But I don't have to. By following the empirical evidence, science has come to the understanding that the existence of a god is not necessary to explain things we know about the universe. And if God is not necessary, then it takes an extra step to believe God exists. Why put something in place that is not needed? That's like adding an extra cog to a motor that does nothing more than to satisfy the designer's propensity for using cogs.

Society would be far more efficient, less violent, less judgmental, and far more progressive if we left faith-based reality out of our decision making and relied solely on evidence-based reality. Because in doing so, we will come much closer to realizing true reality and not just wishful thinking. 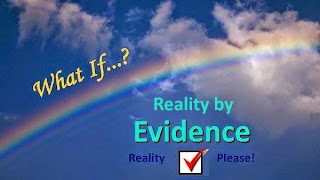