Proof that Jesus was a White Man

FOX News is often lambasted by the left-leaning media for being too conservative, especially on religious and social issues. Host Megyn Kelly has recently been ridiculed by the left for her comments that Jesus was a white man, just like Santa Claus and that both men are actual historical figures. Well, the New York Times and the other liberal media outlets can now eat crow, because archaeologists in Israel have just released a find of historic proportions. And it proves beyond any doubt that Jesus was, indeed, white.

The dig was part of an international effort taking place at Nebi Samwil, a biblical town near where Jesus lived in Galilee. The archaeologists, headed by Dr. Benjamin Naphtali, Professor of Jewish Studies at the University of Jerusalem, unearthed an ancient piece of furniture, a heavy cabinet with embedded compartments, like drawers. These compartments contained mostly debris (broken pieces of pottery, rocks, and soil). But nestled in the corner of one of the compartments was a fairly-well-preserved ancient photographic image of Jesus as a young boy.

How do we know it is Jesus? Because on the reverse side of the photograph is scribbled some words written in Aramaic. Translated, it says "Jesus - My son who came from God, Age 10, Mary." The photo, although it came from a world where everything was tinted with sepia, clearly shows the young Jesus as a white boy. According to Naphtali, he seems to be clutching a book. "Judging from its size and cover, it's probably his New Testament," Naphtali said. If so, it shows that Jesus was already biblically literate even before he taught the rabbis in the synagogue at age 12.

The photo was actually found in February of this year, but the scientists wanted to keep the news of this great find a secret until it could be verified as authentic. Researchers at the Pascagoula Nuclear Laboratory in Pascagoula, Tenn. ran the photo through myriad tests to make sure its age was authentically first century AD. They also authenticated the type of pigments used in the photographic plates of that day. "It definitely is the real deal," said one of the researchers. Using the latest C-14 and even C-15 dating techniques, they dated the photo back to June 14, in the year 6 AD. That, indeed, would put Jesus' age in the photo at 9 or 10, depending on what season he was actually born in.

I have included a copy of the photo showing the young boy Jesus with his bible, and on the back, the Aramaic scribbling. So this should settle the debate once and for all. Jesus was definitely white. Maybe not Nordic white, but definitely an Italian sort of white. Take that, left-wing media and those who would wage a war on Christmas! 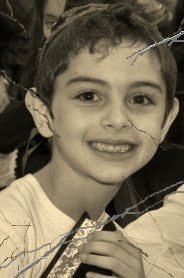 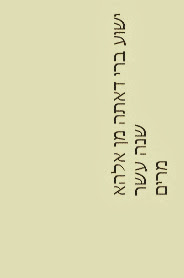 Is there some explanation for why the Syriac alphabet, rather than Palestinian Jewish Aramaic writing, is on the back?

I just wanted something that looked like writing from the day so I Googled "Aramaic alphabet" and picked this one because it fit onto my image. I have no idea what it says, if anything, nor am I familiar with what language it is. My purpose was to parody Megyn Fox, not be historically (or literally) accurate.

Thanks James for providing the authentic Aramaic!